So a while back I was able to get my hands on Fallen the first book in the series by Lauren Kate. After reading the back cover summary, I was quickly intrigued (I have a thing for fallen angel stories) and bought the book. I read it fast and thoroughly enjoyed the book. So here is a quick look into my thoughts on the story.

There’s something achingly familiar about Daniel Grigori.
Mysterious and aloof, he captures Luce Price’s attention from the moment she sees him on her first day at the Sword & Cross boarding school in sultry Savannah, Georgia. He’s the one bright spot in a place where cell phones are forbidden, the other students are all screw-ups, and security cameras watch every move.
Even though Daniel wants nothing to do with Luce—and goes out of his way to make that very clear—she can’t let it go. Drawn to him like a moth to a flame, she has to find out what Daniel is so desperate to keep secret… even if it kills her.

The novel centers around a girl named Luce Price who recently was sent to Sword & Cross boarding school in Savannah Georgia. The boarding school isn’t the New England type that most think of when boarding school pops up in the description. Instead this boarding school is a cross between a prison, mental ward, and school. The story takes the reader through Luce’s days attending the school and the other students she meets–in particular Daniel Grigori. Daniel becomes an obvious love interest, but so does another student–Cam.  The novel weaves in some super natural and soon the Fallen angels do arrive into the story line. But i’ll leave you to read to figure out 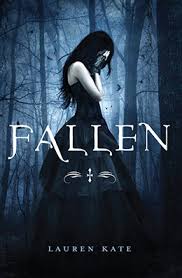 who’s who in this novel!

What I loved about Fallen was Kate’s writing. Most novels have good story lines that draw me in but average writing. Kate, however, has written her characters well. Even the secondary characters of the other students are written well. At the end of the novel I felt like I had understood each character’s behavior and quirkiness. I love when a writer can develop their characters not only in plot progression but in just developing a strong sense of the character before plot even begins. Kate did that in Fallen which drew me in to loving this novel even more.

What I also loved was her ability to add in the supernatural. Her setting added to this greatly, but I felt the supernatural additions were not over zealous or unbelievable. Some of it was subtle until there was enough basis to have it all out, guns blaring. I also loved the graveyard setting and the few hints Kate dropped in there about the fallen angel themes around certain characters (*snake”).

Along with the setting I felt that Kate also did well with the love triangle. I felt Luce’s pull to each love interest and although most avid readers could probably predict who she would end up with, I still enjoyed the suspense. The ending as well gave me the desire to move towards picking up the second novel, Torment. The ending was a little surprising, which I love because I’ve gotten good at predicting most endings with YA novels and love being surprised!

Overall I didn’t find any thing really wrong or worth pointing out that was bad. I know with  reviews you need negative points, but i’m not really reviewing I’m just telling my experiences with books 🙂 So with that in mind, I hope you have an opportunity to read this. If you are into the YA supernatural (not SciFi) genre, this is a great book to pick up. Although everyone reads at their own pace, I do think this would be a quick read just because the story line and writing is so enticing!

Another reason I wanted to write about Fallen (a part from it being wonderful!), I wanted to reach out to other readers of the series and see how they feel about the novels. I was wondering if anyone else enjoyed Kate’s writing technique, especially with the character development! Leave some thoughts below!! Thanks!

Have you read Fallen? Are you interested in reading Fallen? What do you think about the series? Leave your answers below in the comments! or tweet them to me at @PopCrunchBoom with the hashtag #PCBFallen 🙂

Welcome to my little corner of the internet. Here you'll find book reviews, book lists, cover reveals, author interviews and basically anything book related that I'd like to share! I'm an avid reader & love to explore all genres. You'll find mainly YA & MG books here, but some adult titles may find their way in as well. I love to travel, hold up in coffee shops & explore the shelves of bookstores. I'm mamma to kitties & a puppy. Really, I just cannot wait to talk books with you! Thanks for stopping by!

Reviews by the Year

Finished book 1 of the Shadow & Bone trilogy this